Star Wars: Rise of the Resistance opened more than two months after Star Wars: Galaxy’s Edge let in its first guests at Disney’s Hollywood Studios. Mixed reactions to the other SWGE attraction, the food, and the atmosphere left some people, including myself, hoping the groundbreaking ride Disney was promising would be worth the wait. Months later, we learned that, holy hell, was it ever.

I woke up at 4 a.m. on Thursday, December 5, 2019. I checked Twitter and learned people had already arrived at the parking lot of Disney’s Hollywood Studios for the opening of Star Wars: Rise of the Resistance. I brushed my teeth, got dressed and rushed to the car.

At 4:45 a.m. I drove past the parking structure. I was incredibly lucky to get a great spot. By 4:50, I was in line to enter the park. At 5:23, guests entered the park. We were told to wait near the Chinese Theater until around 6:30, when we were ushered into Galaxy’s Edge. During that time, guests were checking into their “boarding groups” through the My Disney Experience app. I was in group 19.

Guests were shuffled into the land in a large line, cattle-style. We were basically forced onto Millennium Falcon: Smugglers Run before we could go anywhere else in SWGE, unless our boarding group had already been called. This was fine. I got pilot and our team got a high score after just a 10 minute wait.

Around 7 a.m. my boarding group was called. I got to the entrance of ROTR and it was a mess. Both guests and cast members were visibly confused. Where was the line forming? Was it even open? Friends in an earlier boarding group then told me the ride broke down and they got evacuated off of it. That’s when I learned what was happening. People in groups 10-20, along with people who had already been on the ride and escorted off, were being given passes to return later when the ride was fully functional again. This was a disappointing misstep at the time, but one that I understood was unavoidable. If the ride wasn’t working, there wasn’t anything they could do besides take the time to fix it. However, mixed messages on what was going on from cast members of various ranks, and general confusion about what was happening from guests, made the situation even more hectic.

I retreated to Docking Bay 7 (Galaxy Edge’s restaurant) until around 8 a.m., when I got a push notification on my phone that people who were given return passes could get in line again. That’s when we made our way over and were finally let into the queue. 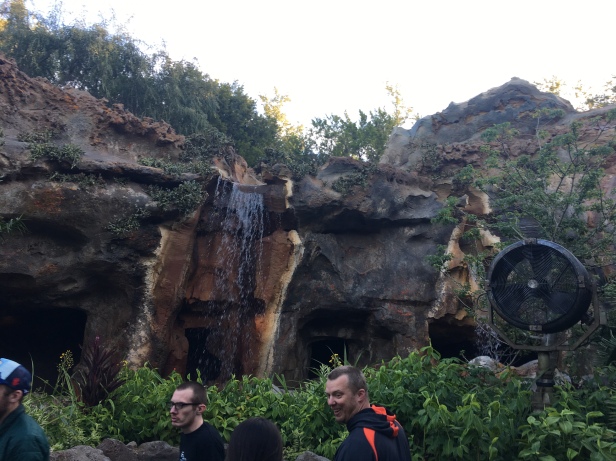 Everything that came next left me with goosebumps and a smile that was hard to wipe off my face.

!!!PRESHOW AND RIDE SPOILERS AHEAD!!!

After a brief wait, we made it to the first of three preshows. Guests are greeted by an animatronic BB-8 (!!!) a HOLOGRAM of Rey, who explains the story of the ride. The realistic look of everything in this room is impeccable. I already have tears in my eyes.

Then you are quickly ushered OUTSIDE and into a cruiser to infiltrate a First Order bade! Once onboard, Poe Dameron and others help guide you in. THE SHIP IS LITERALLY MOVING AND SHAKING. A First Order ship pulls you into a tractor beam and onto its base. The doors open. YOU ARE IN A TOTALLY DIFFERENT LOCATION. 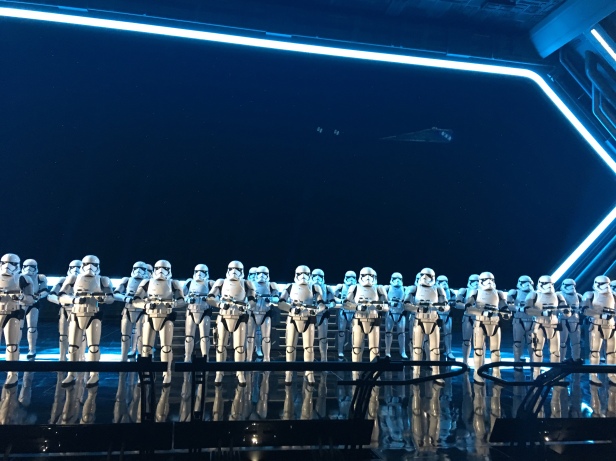 You’re greeted by very in-character cast members and DOZENS OF ANIMATRONIC STORM TROOPERS. There’s a little bit of a smaller line before you’re taken to the third preshow.

This is where you see General Hux and Kylo Ren, who sends you a very intense and FORCEful message about your fate. After they leave, the Resistance FORCE CUTS A HOLE IN THE WALL and you’re ushered into your ride vehicle. Finn sends you a message and you’re off.

I don’t want to spoil the rest of the ride, the story, or the layout. It needs to be ridden for the first time with as little expectation for the visuals as possible. But let me tell you. It’s unlike anything else at Walt Disney World.

The scale of this attraction is MASSIVE. It’s so huge that I am so absolutely thrown off by where the actual show building for the attraction even is. Inside the ride are full-sized AT-ATs, several animatronics, screens, lasers, lifts, drops, and SO MUCH MORE. It’s a MULTI-LEVEL EXPERIENCE. The entire experience from preshow to ride is about 15 minutes. Every minute is jaw-dropping. I got off the ride with my jaw dropped and my hands on my face just trying to grasp what I experienced.

Oh yea, I forgot to mention. THIS IS THE FIRST TRACKLESS RIDE OF ITS KIND AT WALT DISNEY WORLD. The technology is used overseas for rides like Pooh’s Honey Hunt and Mystic Manor. Your vehicle moves independently of the other vehicles in the ride, so you are moving forward, backward, side to side AROUND another vehicle as if it’s a dance. It is incredible to the highest degree.

This attraction seriously completes SWGE as a whole. A space that sat empty for months is now full of action and purpose. This section of the park is improved drastically by its addition.

Aside from a few short hiccups, the opening day experience for Star Wars: Rise of the Resistance was a smooth unforgettable experience for many guests, including myself. I literally cannot wait for the next chance I have to ride this ride. I would wait in any length of line to experience it. I highly suggest you set out the time to take it all in.

One thought on “Star Wars: Rise of the Resistance | Experience”